- January 08, 2018
Hello, my name is Ricke Elaine Ballard Gritten. I am currently a student at IUPUI working towards a Masters in Library Science. I enjoy cult television and movies, books and travel. I am a mother of two girls and am husbanded by Kevin, and act as steward to two cats, Hermione and Bandit. The purpose of this blog is to post weekly  assignments, reflections and reviews required for LIS-S 524 Adult Reader's Advisory. To explore other examples of graduate course work, please visit my Wordpress site, https://ricketiki.com .
Post a Comment
Read more

Week 15 Prompt What do you think are the best ways to market your library's fiction collection? Name and describe three ways you do or would like to market your library or your future library's fiction. These can be tools, programs, services, displays - anything that you see as getting the word out. Three ways to  market  library fiction: 1. Good Old Fashioned Displays The most basic, old school low tech way to market a fiction collection is a display that invites the eye and prompts browsing. This can be a timely holiday display, a themed display centered around a topic, or a display organized like a bookstore, with outward facing books and signage. One of the pleasures of visiting a library is the serendipity factor of discovery. Displays facilitate serendipity.  One note on this, display cases that require a library staff member to unlock the case to get a book out for a patron are not browsing friendly!  (I created the Jane Austen and the Blind Date With
1 comment
Read more "How have reading and books changed since you were a child, for you specifically?" Reflecting on Reading and Me Me Me: Eugen Spiro During my childhood reading was an escape and a refuge and a venue for learning, and eventually an act of identity creation. In elementary school, I read voraciously about dinosaurs and went to church on Sundays with my grandfather and read the Bible. Later, in about third grade, I identified conflicting narratives and took the first steps to be an atheist. (Science won, but I still love a good story.) In fifth grade, I read  A Wrinkle in Time  and identified with Meg when I was bullied and lost my father to emphysema.  Found on Pinterest In the 90’s, I read Christopher Hitchens and learned how to view the world oppositionally and critically, to be assertive and confident to express opinions contradictory to received thought, to reject authority and mock sacred cows. (Like Mother Theresa, what a bish!) I got so go
2 comments
Read more 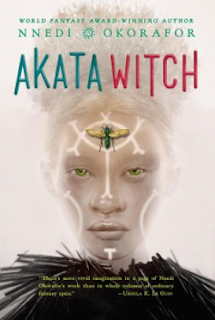 Author: Nnedi Okorafor Title: Akata Witch #1 Genre: YA, Fantasy Publication Date: 2011 Number of Pages: 349 Geographical Setting: Nigeria Time Period: Contemporary Series: Akata Witch Plot Summary:   Sunny is an 12 year old African-American girl, born to Nigerian immigrants, who navigates the world with a few distinct disadvantages that are compounded when her family relocates back to Nigeria: she must deal with albinism in a culture that stereotypes people like her with pale skin, yellow hair and hazel eyes as evil juju practitioners, and she is an American who speaks with a funny accent. At school she is bullied, at home her father’s disappointment that she is a girl is evident. Kids at school call her an Akata, a slur, which means bush animal, or a black American or foreign born black person. After stumbling into her first vision trance that terrifies her with images of an apocalyptic future, Sunny accidentally sets her hair on fire gazing to
4 comments
Read more

Week Thirteen Prompt Though this week's group of "genres" all seem very different, they all have in common the fact that many people don't feel that they are legitimate literary choices and libraries shouldn't be spending money on them or promoting them to adults. The common belief is that adults still don't or shouldn't read that stuff. How can we as librarians, work to ensure that we are able to serve adults who enjoy YA literature or graphic novels? Or should we? I can't wait to read your thoughts on this. Thanks! When applied to any material that doesn’t pose an imminent threat of danger, such as an enchanted spell book that once opened will unleash a hell dimension on earth, the words “shouldn’t read” are not in my vocabulary.  That is not to say that I don’t hold opinions on various titles or genres, in some cases very negative opinions and judgments, but it is not my place as a librarian to impose those views on a patron.
2 comments
Read more
- March 31, 2018 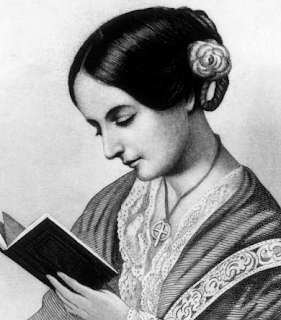 Week 11 Prompt  "Ebooks and audiobooks are a part of our landscape. What does the change in medium mean for appeal factors? If you can't hold a book and feel the physical weight of it in your hands, how does that affect your knowledge of the genre? How about readers being able to change the font, line spacing, and color of text - how does that affect pacing and tone? How about audiobooks? Track length, narrator choice, is there music?  For this week, I want you to think about how ebooks and audiobooks affect appeal factors - also think about appeals that are unique to both mediums. Please feel free to use your own experience and that of your (anonymous of course) patrons. I look forward to reading these!" I was always against ebooks, until I actually read one. I needed a book for an annotation assignment and it wasn't available in hardback, so I found it on Overdrive and presto! As a lover of instant gratification and wish fulfillment with poor impulse
2 comments
Read more 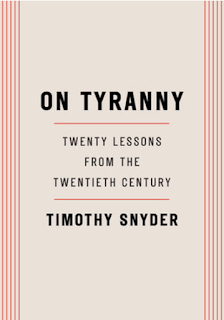 For your prompt this week, please complete the Readers' Advisory Matrix, found on the last page of the reading title "RA Guide to Nonfiction" in the Canvas files, about a non-fiction book you have read. If you have not read a non-fiction book recently, feel free to use some of the techniques on how to "read" a book in five minutes such as Mary Chelton's handouts or any others we have covered to get a feel for a non-fiction book. I look forward to reading these! Author : Timothy Snyder Title : On Tyranny: Twenty Lessons From the Twentieth Century Publication date : 2017 Number of pages : 126 Geographic setting : N/A Time period : 20 th and 21 st century Subject headings : Despotism. History, Modern—20 th century. Political ethics. Democracy—United States. Political culture—United States. Type : Book Series notes : N/A Book Summary : An essay divided into twenty sections on lessons from past episodes in hi
11 comments
Read more
More posts